Viewing multiple collections at once

The latest build (113) let’s you view multiple collections at once. Command+click them in the Mac app, or tap “Select” => select them => “Show together” on iPad or iPhone.

There are some limitations in this mode: All their items are shown in the list and on the map. You cannot edit the settings of each collection in this mode or search for new things to add, but you can edit existing items. At the moment there’s no way to save the set of collections you’re viewing or any “Organise” formulas you attach to them (though Maparoni will remember the current formulas that you set for them).

Where this gets quite interesting is that in the “Organise” section, there are new formulas you can use in this mode, what we currently call ‘meta functions’ which are documented at the bottom of the formula guide:

We’d very much appreciate some feedback on that and, in particular, if there are other formulas you’d like to use that make sense when viewing multiple collections at once.

Thanks for this - I’ve done an import of two collections (one of polygons, the other of points) and it works well. Especially pleased with the shapes being rendered in preview - the list is pretty useful now for my dataset.

A few quick observations:
a) is this available for iOS yet? Neither of my devices have received 113 via Testflight yet, only available on OSX
edit: Testflight offered 113 a couple of hours after I added this comment.
b)

Some general observations:
c) is there a way to control the stroke/line width of polygons that are rendered on the map? The reason I ask is because if I render a lot of adjacent areas in a single colour (say, the default colour) then the boundaries are not particularly well defined. At outer zoom levels, I can see it is a light grey but doesn’t work at every level. To differentiate between region polygons, I use the colorise snippet to fill each polygon with a random colour but for an actual visualisation, it is entirely possible adjacent regions may need to be rendered in the same colour.

d) There is some strange behaviour if I merge render two collections (one of polygons, the other of points) and then apply a colourising formula after merge. 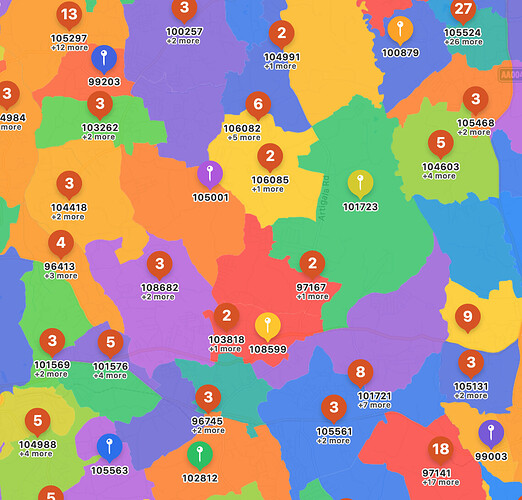 There was fair warning that this wouldn’t work, so I’m not sure it is a bug per se

e) Some random clicking also has strange results. For instance, the following scenarios (which I am sure you already know about, but just in case)

Thanks again for the feature though, it’s unlocked a lot of possibilities for me

Great to hear this is working quite well for you so far, and thanks for the feedback!

c) Good idea to allow colouring strokes, too. That’ll be available in the next beta where the colored formula gets a second optional parameter that you can use to colour the outlines of a polygon.

d) When you select multiple collection, you’re creating a temporary “meta collection” that combines the individual collection. Each item should maintain what is set on its collection, but anything you select in the “Organise” section would overwrite any of that. That section will show presets from each collection, but it’ll then apply them to everything. So I guess this is expected. You should be able to control it by creating a style formula manually such as collectionName == 'polygons' ? colored(red) : colored(yellow). Does that work or is there a genuine bug somewhere?

e) Those things should work. And it generally should work to select two collections and then select a third. However, possible that there’s some case I haven’t detected. It does seem like there’s some memory or performance issues when selecting/deselecting quickly. I’ll dig in and see what’s going on! Edit: I’ve identified an issue that’s made worse by toggling collections back and forth. It will be fixed in the next beta.